Can the Sheriff evict tenants again in Ontario?
Is the Covid Emergency over?

People are generally aware that since mid March 2020 tenant evictions have been suspended in Ontario.  Any legal evictions that did happen after March 19, 2020, happened as a result of an exceptional circumstance and a Judge of the Superior Court specifically making an exception to the suspension of eviction Orders.  Since March 19, 2020, evictions orders issued by the Ontario Landlord and Tenant Board and any Writs of Possession issued by the Superior Court of Justice have been suspended and unenforceable.

Technically speaking, how were evictions suspended?

Evictions were suspended as a result of the Attorney General for Ontario (i.e. the government), bringing an application to a Judge of the Superior Court of Justice asking for an Order suspending evictions.  This application was brought without notice to anyone (i.e. landlords, the public, tenants, interested parties), and the Court issued the Order suspending evictions on March 19, 2020. 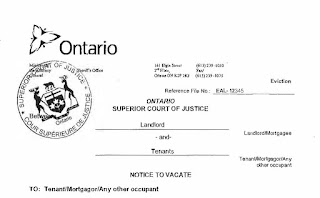 It is because of this Order dated March 19, 2020, that tenants have not been evicted regardless of whether an eviction Order is in place or not.  Further, the Court Order prevented the enforcement of any eviction  including evictions based on criminality or impaired safety.   Cases involving criminality and serious impaired safety could (and were) brought on an urgent basis to the Ontario Landlord and Tenant Board.  The Board, if convinced on motion that the case was about a serious illegal act or impaired safety, did agree to hear such cases even though the Superior Court ordered that the Board's eviction Orders could not be enforced.

If the Board issued an "urgent" eviction Order the landlord then (because of this Superior Court of Justice Order dated March 19, 2020), had to bring a motion to the Superior Court asking a Judge to make an exception to the eviction suspension order to allow the eviction of a particular tenant.  If that was granted the Sheriff was then directed to enforce the eviction.   Over the last month (or so) there have been increasing numbers of such "exceptional orders" as landlords did bring cases forward on grounds of criminality and impaired safety.

To be clear, cases involving non-payment of rent, or landlord's own use, or purchaser's own use, or substantial interference with reasonable enjoyment, remained virtually impossible to bring and to enforce.  The eviction moratorium barred evictions based on these grounds.

The Order that suspended the evictions was amended on July 6, 2020.  This amendment was done again on an ex parte basis (without notice).  The motion to amend the Order was brought by the Attorney General for Ontario (i.e. the government).   The Order was amended to now read that the suspension of evictions would terminate at the end of whichever month in which the Covid Sate of Emergency was declared over.  A copy of the July 6, 2020 Order is attached at the end of this article.  Take a look at paragraph 2 if you want to see the specific wording.

Is the COVID State of Emergency Over in Ontario?

The part of the Reopening Ontario Act that determines that the Covid State of Emergency is over is section 17.

17  Unless it has been terminated before this section comes into force, the COVID-19 declared emergency is terminated and Ontario Regulation 50/20 (Declaration of Emergency) is revoked.

Why the suspension of evictions is over

The July 6, 2020, Order of the Superior Court of Justice provides that the suspension of evictions (created by the Order) ends at the end of the month in which the State of Emergency is declared terminated.  The Covid State of Emergency was terminated in July 2020 as per the Reopening Ontario Act (section 17).

Therefore the suspension of evictions continues until the end of July 2020 (in accordance with the Order) and starting August 4, 2020, evictions may again be enforced in Ontario.  Of course, this is subject to other procedural rights and legal process.  Landlords must still get Orders from the Ontario Landlord and Tenant Board and the procedural aspects of serving Notices of Termination, waiting the required time, filling out an application and filing it, and getting a hearing date, having a hearing, and waiting for an Order must still be followed.  Nothing in the lifting of the suspension of eviction has created a fast track for evictions or over-ridden the application process under the Residential Tenancies Act.

At the time of writing this article, the Advocacy Centre of Tenants Ontario (ACTO) has filed an urgent motion to the Superior Court asking for the amended Order that allows the suspension of evictions to resume to be set aside.  The relief that ACTO is seeking is complicated but we should know very shortly what comes of this motion. 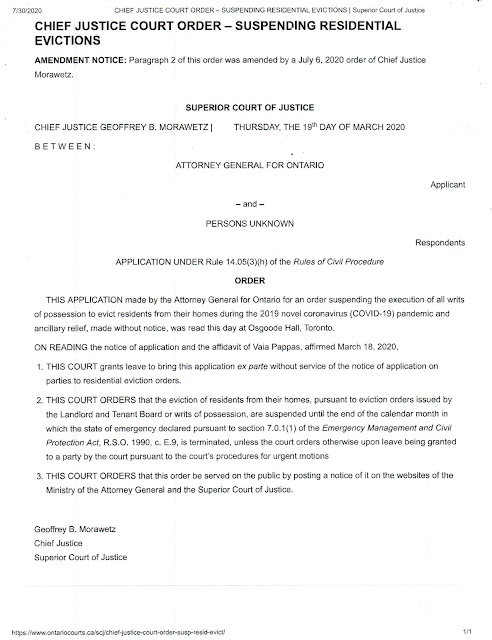