What is a landlord to do about marijuana smoke?
With the legalization of medicinal and recreational cannabis in Ontario landlords are finding themselves confronted by problems that are bolder now than they once were.  Before legalization, tenants for the most part sought to consume their cannabis in a way that drew as little attention as possible.  As the practice was illegal, bothering other people and other tenants with cannabis smoke was easy grounds for serving a Notice of Termination and for eviction if the activity did not stop.  That isn't quite the case anymore, at least not in as straightforward a manner.
Tenants (and Ontarians generally), no longer need to be concerned about the legality of their behaviour in smoking cannabis.  Given that the government licences the sale of the product, in various forms, the stigma once associated with cannabis consumption is waning.  As the practice becomes more accepted people are less concerned about "where" and "when" they smoke.  People who never smoked cigarettes are indeed smoking cannabis.  These people don't have the experience of being a shunned tobacco smoker and don't have the experience of dirty looks and being sent outside 9 metres from the nearest opening to the building.   Many cannabis smokers simply think "It's legal", so they smoke without thinking that the cannabis smoke they create is as disturbing, bothersome, allergic reaction inducing and asthma exacerbating as tobacco smoke.
Landlords are getting calls from other tenants in their buildings.  The calls are complaints about cannabis smoke, the smell of smoke infiltrating other units, smoke drifting through open windows, and smoke coming through shared ventilation systems.  In the face of complaints landlords will approach the marijuana smoker (or suspected smoker).  Some respond politely, but others deny smoking, assert a right to smoke, assert a Human Right to smoke, or even further suggest that prohibiting smoking cannabis interferes with their use of their "medicine".
What does a landlord do?  What must a landlord do?  Forget about any moral imperative, personal view on the wisdom of cannabis consumption, the essence of the question is what is a landlord's obligation when other tenants are bothered by the presence of cannabis smoke in the residential complex?
If landlords do not respond properly to a complaint about the presence of cannabis smoke the landlord can face an application to the Ontario Landlord and Tenant Board by the tenants who are complaining.   While the landlord isn't the one smoking, the landlord is made responsible for not adequately dealing with the presence of the cannabis smoke because it is the landlord's duty to ensure that her tenants in the residential complex have quiet and reasonable enjoyment of their home.   The duty arises under the Residential Tenancies Act and it is further an implied term in every residential lease in Ontario.  If a landlord breaches this duty, then the landlord can face a variety of remedies including a significant rent abatement, associated costs, claims for damages, moving expenses, rent differentials if the complaining tenant was forced to move, and a wide range of expenses limited in scope only by the imagination of the complaining tenant and the LTB's willingness to entertain the claim.
A REAL LIFE EXAMPLE and BOARD ORDER dealing with this issue.
I have recently had a case at the Landlord and Tenant Board dealing with cannabis smoke, complaints about it, and a constellation of interesting if not bizarre additional complications and facts.  This case, reproduced below (with redactions of the address and last names of participants), demonstrates how my landlord client dealt properly with the complaints about cannabis smoke, the presence of marijuana plants, denials, medical cannabis, recreational cannabis, severe disabilities, and conflicting statements by a host of different tenants.  In this decision, Adjudicator Moniz makes a careful analysis of the various complaints, the impact of the presence of marijuana smoke on the complainants, the reason for the presence of the smoke, the presence of the marijuana plants in the yard, and the steps taken by the landlord to deal with the complaints.
It is significant to recognize that Adjudicator Moniz accepts that the complainers were indeed bothered and upset by what they alleged occurred.  The fact (found as a fact by the adjudicator), that the tenant's were bothered is not the test for entitlement to damages (expenses, rent abatement, moving expenses) at the expense of the landlord.   If the fact of being bothered was the test then the landlord would effectively become the insurer (guarantor) of a tenant's happiness in a rental unit and automatically be liable for any interference (by any other tenant) with that quiet enjoyment.
In this case, the tenant's claim against the landlord is dismissed because the landlord responded reasonably and in accordance with the established precedents on how a landlord is to deal with complaints (i.e. take reasonable steps to correct the intrusion of a neighbouring tenant on a tenant's right to quiet enjoyment of a rental unit). 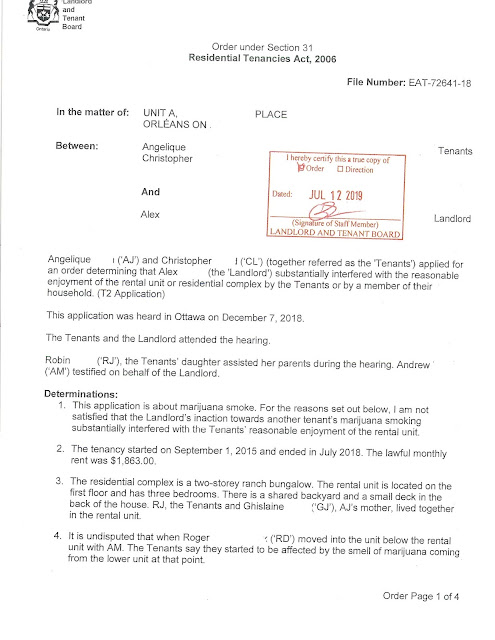 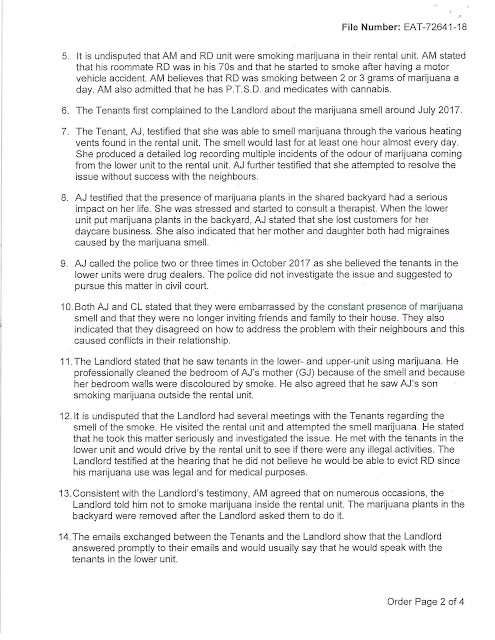 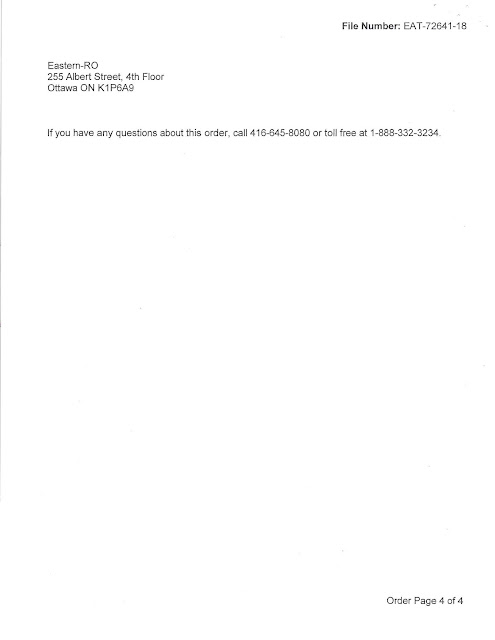